Prefaces of Jean-Yves Leloup and the Lama Jamyang Tashi Dorje

Kyrios was overcome by the Divine inspiration which revealed to him the sacred gestures that make the Lord’s Prayer a true universal prayer.

The Mudra Pater – Sacred Gesture is a book of White Wolf in which is revealed the sacred gesture that goes with the prayer that Jesus taught his disciples, the Lord’s Prayer. This prayer, even if it is said especially by Christians, concerns everyone: it is not addressed to the Father as to “my father” but as to “Our Father”, that of all. Whether they are Catholics, Buddhists, Jews, Muslims, Hindus, or any other religion, all can say the Lord’s Prayer. But each will pronounce it in his own language, and all will not understand each other.

Meditating one day on this contradictory aspect between the universality of the Lord’s Prayer and the multiplicity of languages, Kyrios was then overcome by the Divine inspiration which revealed to him the sacred gestures that make the Lord’s Prayer a true universal prayer.

All five practices draw the complete pentagram of the Mudra-Pater, making the Our Father a prayer to live, an approach to Being.

There are no reviews yet. 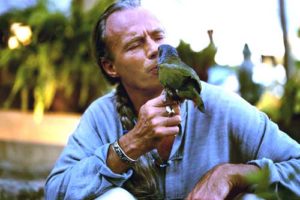 From Reading to the quest for Self

In his books, as in his Teaching, White Wolf (Ahimsa Hridayananda) brings us a new vision of spirituality. Indeed, He makes us travel as well in shamanism, primitive Christianity, Hinduism, Buddhism, Taoism ...

This rare and authentic approach connects us even more directly to the Original Source.

Through simple and direct language, White Wolf transmits essential keys to our liberation.

To read a book of White Wolf and to follow the practices that are there is also to receive the energy Śaktipāta (Shaktipat) that He transmits generally during Initiations.

When a Master transmits the Śaktipāta, all the processes of evolution are accelerated in the one who receives it! One can speak of a Divine Grace ...