White Wolf is a Yogi Shaman, recognized in each of the 5 main spiritual paths: shamanism, primitive Christianity, Hinduism, Buddhism and Taoism. White Wolf Shaman transmits Shaktipâtâ to awaken the Kundalini in each one of us…

White Wolf Shaman was born with the awareness of “I Am” and at the age of 7 he already realized “It”. He first gave his Teaching to small groups. In fact, people only approached him by word of mouth because he refused any form of advertising …

Until then, White Wolf favored Christ and Yogic path. But in 1996, during an initiation session which he gave, Thathanka Iyothanka (1831-1890), better known under the name of Sitting Bull, appeared to him.

Much more than a vision….

Much more than a vision, Sitting Bull stood there, just behind White Wolf who was playing on tablas (Indian drums). During this meeting, Sitting Bull said to him: “You were a great Indian Chief”. He also told him that no drum had sounded like his for a hundred years. He then asked him to do awakening concerts around the world in order to awaken and spread the shamanic path.

This important meeting around the Indian percussion instruments was highly symbolic. Indeed, tablas, as of shamanic drum, take us into the world of rhythm which brings together both yogic and shamanic paths. During this meeting, Sitting Bull said to him:

“You were a great Indian Chief”

At this moment, he chose not to say anything more about this vision.

Soon enough, White Wolf regained possession of his shamanic spirit as if he was born to it. Indeed, he had been in contact with the Red People and the spirit world – the other reality – since his birth.

For 15 days, White Wolf reclaimed his past memory which immediately became a memory of his own. This is when the Shamanism of the Origin was born.

All the students present at that initiation testify that they were deeply touched by what they saw and experienced!

White Wolf Shaman has received several initiatory names matching with each great tradition and which he uses according to the teaching he’s transmitting. 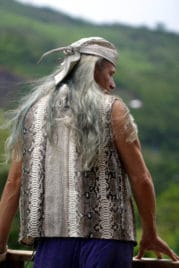 In Hinduism, he is named Ahimsa Hridayananda, which means “non-violence of the heart of bliss.”

In the tradition of original Christianity, it is Kyrios,

which is none other than his civil first name translated into Greek; it means “shepherd, friend of the Divine, little prince …”.

In the Taoist tradition, it is called Wan-Yang, which means “ten thousand universes”.

White Wolf Shaman is his Shamanic name, as well as one of his past incarnations, Red Cloud.

The name given by the Origin is Joachim, which means “raised by God”.

In Native American traditions, one who has many names is considered to be a very wealthy person spiritually.

But White Wolf Shaman refuses all labels that are linked to our limitations and our constant need for recognition and identification. As you can see, the titles of Shaman, Shaman-Yogi, Spiritual Guide or Master used in our pages are mainly used for referencing this site.

A presence on all continents…

White Wolf Shaman is recognized by other realized awakened Beings. This is why he is regularly invited to share his teaching.

For example, following his meeting with Master Zao, White Wolf Shaman became the European Qi-Qong Leader of this Chinese Master’s Crane Flight. Therefore, he’s the only master in Europe with this title.

During his last trip to India, Brahmans asked White Wolf Shaman to come and teach there, and even offered to find a place for teaching…

Regarding the shamanic path, Clayd of the Sheshoni tribe invited White Wolf Shaman (guest of honor) to Naraya in the United States!

He met Kakavera, a Shaman from Brazil, and Atawallpa, another Shaman from Ecuador who came to Europe to dance with him to the Origin rhythms. He met many other Shamans in the Amazon including Weston, a curanderos. They are friends. Weston recognizes in White Wolf Shaman an authentic shaman, and White Wolf recognizes in Weston a person of integrity who works with different Amazonian plants and who knows his shamanic art well.

Some of these Masters and Shamans were also invited by White Wolf Shaman to come to France to share their practice during shamanic initiations.

Writer and musician of the Soul... 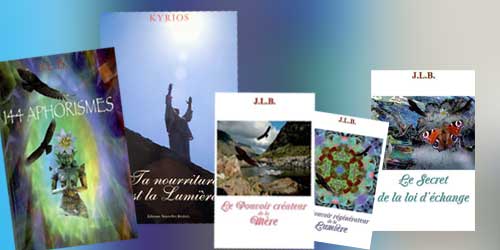